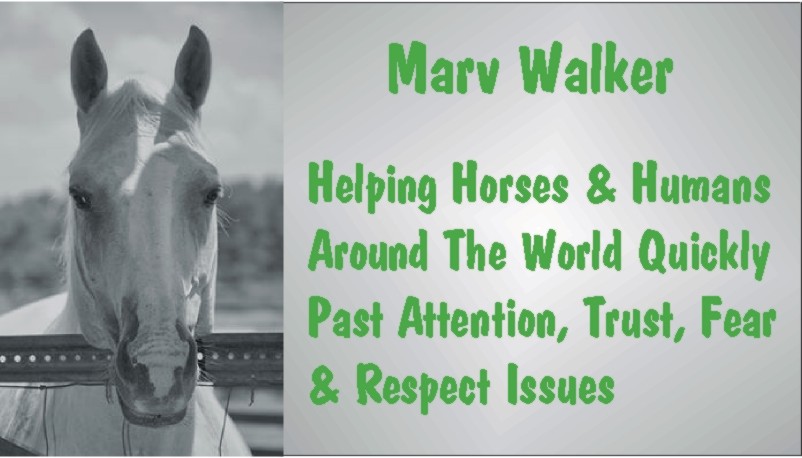 "I recently ran across your posts on communicating in the round pen and am anxious to try the techniques with my young Arab gelding. He kicked me a couple of times on the ground last year and again recently during an involuntary dismount as he spooked at a tarp (at a clinic). Last year my husband broke a couple of bones partly because of the spookiness of this gelding. The gist of it is that we don't bounce as well as we used to and really need to get our 2 horses to behave more like the "broke horse" you described if we're going to continue riding. We'll see how it goes."

Horse folk generally consider spooking to be any adverse abnormal reaction to an occurance. While the writer is talking about relative unusual reactions spooking can be ANY negative reaction to anything. If you put a saddle on a horse and the ears lay back, the horse looks around obviously upset, or it steps slightly away, anything other than just ho-hum accepting it, it is spooking.

I'm not sure there is such a thing as a totally spook-proof horse. I'm sure there are many horses who spook so infrequently that for all intents and purposes they are relatively spook-proof, but all horses certainly are spookable to some degree. I believe spooking has its roots in insecurity (DUH!). When we have a horse that trusts its human (or rather, its leader) it is far less likely to spook. By increasing the horse's trust in its human (or rather, its leader), we can tremendously lessen its tendency to spook.

At one of my clinics we would carefully examine this horse to see if there are any physical reasons for this excessive spookiness. Sometimes exercise can loosen, relax or relieve a physical abnormality so if we can check before we begin it will often give us more information to work with. If it is dangerous to check the horse beforehand, it'll be less dangerous afterwards. Finding none we can suspect it is a trust issue and then we can put it through the herd dynamics procedure called the "bonder" to greatly increase its trust..

Some breeds of horses, like Arabs (generally) , are more prone to muscle tension than other breeds often to the point of pain...they often simply hate being touched because they are so tense. The stored up tension makes them sensitive to touch or the expectation of being touched and because of this we often get a severe reaction when we touch, or attempt to touch, them. Ill-fitting equipment, vertebrae out of place in back or neck, sprung ribs, you name it, can all cause spooking. The spooking often indicates an underlying physical problem.

Some horses have vision problems which may cause excessive spookiness. Vision problems may come from things other than the eyes.. For instance, a sore back can cause vision problems by causing the head to be held at an exaggerated height. Too much dish in the face, roman nose, exaggerated quirk bumps, eyes located too far from the points of the face or located too close together, unusual colored eyes (perceive light reflections differently), you name it, all affect a horse's vision. When a horse's vision is affected it perceives things differently than normal visioned horses. I have ridden many white, and blue, eyed horses who reacted more strongly to very light-colored discarded appliances and furniture off the trail than brown-eyed ones do. It is almost as if the lighter colored objects appear bigger than life to them.

In nature, free of human influence, the lead mare determines how the herd will react to a threat or spook. If she ignores it, the other herd members do as well. They may move off a little or give token fear to it, but for the most part, her indifference assures them. The members of the herd look to her for her reaction and act accordingly. They may take off but they quickly swing back to join the herd...safety in numbers and all that.

We see this demonstrated when some members of the herd spook and take off as the lead mare goes about her business. In no time the spookers look back and see the lead mare isn't coming along and they turn back toward the herd. They don't spook far. If the lead mare spooks, EVERY horse spooks and they will spook as long as she does.

Since the bonder duplicates the lead mare herd dynamic and the horse is in effect "in the herd" the horse looks to the leader (bonded individual) for direction in resolving the condition the bonder sets up - which is a herd animal being herdless. After the bonder is completed I begin the despooking by once again looking for any physical problems that may need addressing.

Providing I find no physical cause for the spooking, I work on finding and relieving as much of the horse's tension as I can while it is standing beside me all the while trying to keep myself in a position that will lessen my chances of being kicked or run over should the horse suddenly spring away. I massage its face, its poll, its neck working my way down to its mouth. I retreat at the slightest sign of objection and then the second the horse stops objecting I go back until he objects again. I repeat that until he no longer objects. Actually, it is uncommon for a horse to do much objecting to being handled after it has gone through the bonder. After the bonder the horse objects to a WHOLE lot less than it did before *IF* it objected to it before.

If he moves away from me I send him back out for a couple laps to give him a moment to forget his problem (his annoyance at being touched) and to refresh his memory about our agreement (to allow me as leader to call all the shots in our "herd") then I allow him to return and we pick up where we were before he left. Each time he goes out increases the time before he goes out again.

Usually by this point he almost always accepts an awful lot because I am the herd leader and he takes his cue from me. I am not disturbed by what is happening, therefore he isn't.

For whip fear, tarp fear or whatever fear, I bring the object into the center of the pen. If he leaves I let him lap a couple times then turn him back and forth on a small section of the pen 4-5 times. Then I give him the opportunity to come to the center with me and the spooker. I do that by ignoring him and waiting a few moments for him to come beside me. If he does not, I short turn him on the arc a few times then ignore him again. For the most part, I make no effort to drop the spooker or move it excessively.

In essence I do the bonder reminders *with* the spooker in my hand. If the horse is blindly spooky, I do make some concessions to that and try to make the spooker less obvious. I have worked many horses who "go berserk when s/he sees" the fear object and so far I have not found one who in my opinion really went berserk. At the very most they get guarded and as long as I don't corner them by closing off escape paths, I don't have any trouble.

In a few minutes he pays little attention to the item and will stand beside you while you work it around and over him. The more the horse tolerates at the conclusion of the initial bonding the less likely he is to spook wildly. It is not uncommon for the horse when spooked by something to put you between it and the spooker or if spooked while away from you, to move to you for guidance.

Time after time third parties can spook a horse after it has successfully completed the bonder and it will seek out its "leader" and place the leader between it and the fear object.

While *I* personally find little difference in doing the bonder with or without a spooker, I am very experienced in round pen maneuvers, I would suggest taking it easy with spookers. Work the session slowly and easily while concentrating on re-enacting the bonder. There is no hurry, and your safety and the horse's safety is paramount...and in that order.

I have a problem with all of this "puter palaver" in that it is very difficult to get across just how simple these techniques are. Succeed once and they will be locked into your mind. If you were to watch me work this horse, you'd slap your forehead and go.."DUH! THAT'S *ALL* there is to it??" In fact, one of the biggest hurdles I have to get past is people saying, "There *HAS* to more to it than that! It can't be that simple!"

It *IS* that simple. However simple the concept is there are variables that require extreme care in working with spooky horses with a spooking item in a confined area. Any time one works with horses one must exercise due caution and take every precaution possible to insure personal safety.

This spooker is also less than an hour and will dramatically reduce the spooking tendency. It is not as effective on horses with physical spooking indicators, but it will noticeably lessen it. If the spooking is a trust / fear issue it will nearly eliminate it.

I would not ride this horse until it was thoroughly de-spooked.