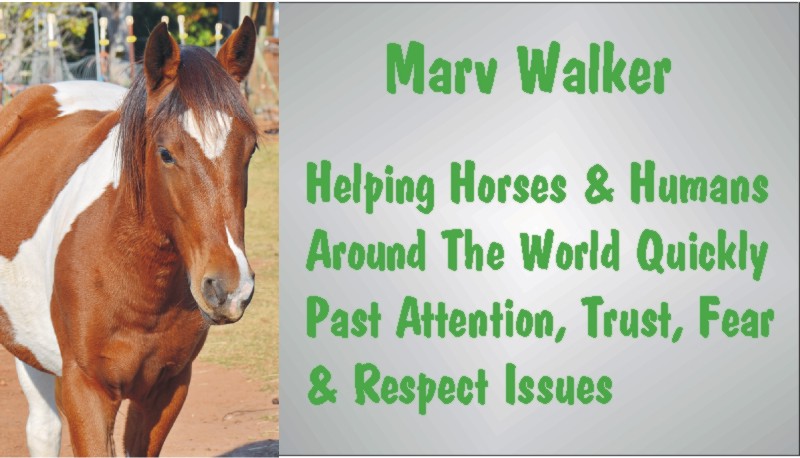 Introduction To
Marv Walker The Horseperson

My name is Marv Walker. I used to live a few miles from the Georgia International Horse Park in Conyers, GA, the site of the '96 Olympic Equestrian Venue. I, along with my long time friends and former horse partners, Bob and Kellie Sharpe, was fortunate to play a part in bringing the venue to Conyers in a none of the other bidding communities had the slightest chance bid.

Now I live on a farm in Hillsboro, GA around 45 miles from the GIHP.

For much of my 70 plus years I have had a love affair with horses. The first horses I had any experience with were my grandfather's heavy draft horses. I can often close my eyes and still smell and hear them, especially the times when he would harness them to skid logs, work the fields or gather ice for the icehouse from the frozen lakes of Michigan's Upper Peninsula close to the shores of Lake Superior in the winter. My uncles would saw huge chunks of ice from the thick ice at the surface and hook the horses to the chunks with tongs and then they'd skid the ice back to the icehouse where it would be buried in sawdust for use in months like July & August.

When I was in school I tried everything I could think of to be able to ride because we were unable to have a horse of my own. I struck a deal with a riding stable owner who assured me I'd be able to swap my work for riding. And I would have been able to had there been any horses that were not needed for paying clients to ride or horses that were tired from being ridden. Every riding stable I've ever had anything to do with became a riding stable because they had a herd of horses and the horses needed to earn a little of their keep. Most of the stables had a significant herd of horses of which a small number were actually rideable. The rest were vice-ridden or unsound.

I guess it was that beginning that gave me my preference for vice-ridden horses. I learned a lot from them and over the years became fairly adept at solving problems.

For a long time I used the "force" method of getting a horse to comply with what I wanted. I always operated under the idea that the horse was just spoiled and needed showing who was boss. More often than not, I was able to show them. Sometimes, they showed me and became the inspiration for my line, "I'm a Cereal Cowboy...I Snap, Crackle & Pop when I move."

Then I met Linda Tellington-Jones. I attended one of her demo clinics some 30 years ago or better and in mere minutes LT-J convinced me there was a better way of dealing with horses and opened up a whole new world. I became aware that horses can have headaches, off days, physical problems that may not be obvious and even mental problems that prevent them from being able to give their best. Since then I have eagerly devoured every bit of information I could find wherever I find it and weighed it against experience, common sense, success and whether or not it meets my criteria: 1.) it has to be reasonably safe for the horse; 2.) it has to be reasonably safe for me; 3.) it has to work EVERY time; 4.) the horse must be better when I'm done working with it.

If something doesn't fit those 4 points, I throw it out.

I had spent a lot of time in my life simply observing horses and watching how they interacted with each other. I saw they had a ranking or pecking order within the herd that set some individuals up as leaders and the rest as followers. I began working some of those things I observed into the work I was doing with horses.

But it was a lot of hit and miss. Everything I tried seemed to work but the problem I had was trying to figure out how to time the steps.

I always had somewhat of a reputation for being able to get into a horse's mind. I was able to develop a bonded relationship with almost any horse I worked. I would keep working with a horse until the horse screamed at me, "I'VE GOT THE PROGRAM, YOU MORON!!! I DON"T KNOW WHAT ELSE TO DO TO CONVINCE YOU!!!" Some times it would take weeks even years.

And then I read a book by one of the media darlings and in reading the angst-laden tome all I found were a couple little bits of information about horse behavior that I had noticed but hadn't quite grasped the significance of. Once I realized that someone else was aware of these behaviors I knew instantly why my system worked so well and I *KNEW* at that moment how to predictably duplicate my results in minutes instead of days, weeks, months even years.

My first horse after that realization was a very annoying, dangerous to ride 19 year old broodmare and show horse we had. If you were still on her when you circled the arena, you were high in the ribbons. Those who rode her considered it a religious experience - "Let me off and I'll never ask for anything again!!" It was described to me as riding a motorcycle with no brakes. Leading her was no joy either. I was just tired of her antics and intended to put some leading manners on her as a test of my new revelation. She had been away with the trainer for years until we and the trainer burnt out on showing and she came back home with the trainer's warning, "Don't let anyone ride that horse!" When the trainer's brother unloaded her he handed me the leadline with, "I rode that horse once."

I got her in the round pen and started applying some techniques. In about five minutes I had a totally different horse. She became my favorite all time trail horse. The rapid results I obtained with her gave me a sense of horse confidence that is pretty much unflappable.

Well, around that time the Horse Whisperer thing got started and someone called the paper about a local "whisperer" they knew of. Well, the next thing I know I'm much better known and people are contacting me from around the world asking my advice on horse problems. Folks kept asking for clinics and so I started doing clinics. Now I do clinics, private work around the country and consult with folks outside the country. And I provide DVDs demonstrating the techniques I use.

The Bonder, or rather, the herd dynamics procedure I use on every horse I work with is available FREE on the web but I move its location around on occasion because I want to keep track of who has a copy in case I want to add some things to it. You can always find the current location by sending an email to my auto responder, Bonder@MarvWalker.com Click Here For Your Free Copy. In a few moments you will receive an automated message telling you some stuff I want you to know and the current URL of the "bonder."

I have a Facebook discussion group Marv Walker Horses where all manner of horse info can be posted and discussed click here to check out the group. We'd love to have you join us.