"Whoooeee! I Told You She's A Kicker!" 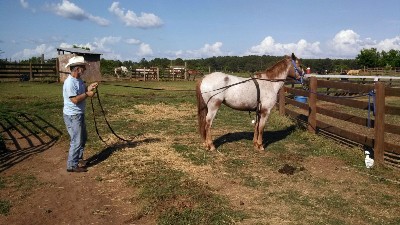 As I said on another page, Shannon Milner, director of Brave Meadows Therapeutic Riding & Horsemanship Center in Gray, GA., where I did some volunteer work, challenged me to work with Faith, one of the Brave Meadows' horses who had been left to her own devices for a number of years.

Faith had had a number of physical issues as a foal requiring a significant stay at the vet school which, according to Shannon, had resulted in her getting a lot of shots making her touchy about her hind quarters and had had some "cowboy" training before being brought back to Brave Meadows to be mostly left alone.

Far from being a challenge Faith has turned out to be a real joy to work with because our progress has been very dramatic. Initially incredibly aloof, she gave no indication of your existence when you went to catch her. She didn't overtly ignore you. She knew exactly where you were so she could ignore you. As you approached her she would simply just turn away and put her butt toward you. I have a rule - I only get within kicking distance of a horse I have under control. As she turned her butt to me I'd move around and go toward her head and she'd casually move so her butt was to you again. She made no effort to move away or run away, she would just turn.

In just a few sessions she has stopped moving when I walk up and on occasion would even walk toward me when I went to get her out of the field.

A considerable number of intuitive horse people put great stock in the swirls, whorls, and other assorted hair patterns found on horses as indications of the horse's personalities and characteristics. While these patterns can be found anywhere on the horse they most often noticed on the horse's face.

I have found these patterns to be somewhat reliable in their indication. For instance, a two swirl horse, one who has two distinct swirls side by side, is a complicated, often inconsistent horse and requires an experienced horse handler. The higher the swirls appear above the eyes, the more complicated the horse. A horse with a single swirl is considered to be a "normal" horse with the location of the swirl above, between or below the eyes being an indication of the horse's intelligence. The higher the swirl, the more intelligent, and many times the more mischievous, the horse.

There is a swirl pattern often referred to as a "feather." That is where the hair pattern appears as an obvious line going down the center of the face. Horses who have this hair pattern are considered "people friendly" horses. Linda Tellington-Jones often says if a horse displaying this type of swirl is not a people friendly horse steps should be taken to find out why.

It is generally accepted that hair patterns stay the same throughout the horse's life.

There have been a couple of times when I have noticed "feather" swirls appearing where they weren't before.

This observation is what the scientific bent minds call "anecdotal." It's just what appears to be true to people in the absence of a scientific study or actual evidence.

I seldom pay too much attention to hair patterns anymore which is probably why I have not noticed more changes. I've gotten to the point where I do what I want with the horse. If it lets me, fine. If it doesn't let me, that's fine too. Either way, I know what to do next. If it lets me I continue with what I'm doing. If it does not then I re-enforce my herd leadership position until the horse accepts and then I continue. If the horse can do what I'm asking and I'm not hurting the horse, why shouldn't it do what I'm asking?

There is a big problem with my videos. The problem is I hardly ever demonstrate what the horse is like before I start working with it. I should show the things the horse resists, putting my fingers up its nose, in its ears, lowering its head and what have you but I really don't care because my main goal, no matter what, is to get the horse to accept me as the herd leader. When it fully accepts me as herd leader, it will allow me to do those things and more.

I create confidence in horses by having them look to me no matter what happens. Confidence is knowing beyond a doubt you can do what is expected of you. If you can do what is expected of you there is no fear, no tension. If you are a confident horse ears that once were upright, close together and vigilant are drooping off the side of the head and unconcerned. What controls the location of the ears? Muscle tension. If ears are affected, why wouldn't facial muscles affect facial swirls?

Years ago our long time ribbon machine returned home with all kinds of dire warnings after we quit showing and the trainer was burning out. To put it bluntly, she was nuts as most highly competitive show horses are. I had just come to the realization that I could do in minutes what took me months and years to do before and I grabbed her from the pasture and in less than five minutes she was a totally different horse. She became my all time favorite trail horse. I could fall asleep on her and wake up way on down the trail.

One day I noticed she had a feather swirl and I thought, "Hmmm, never noticed that before."

Not too long ago I went out to get Faith and as she walked up to me I noticed an obvious very long feather swirl down her face and thought, "I would have noticed that before." I put the halter on her and turned and walked toward the gate. I kept feeling jerks traveling up the leadline and I turned to see her telling other horses to stay away.

I pound the snot out of her with a whiffle ball bat and the impacts sound like firecrackers as I pound her muscles and she stands unconcerned untied. She gives to light pressure, she's calmly and quietly learning to longe, she is making smooth headway.

I'm not real crazy about doing clinics where people are getting along fine with their horses and just want to get along a little better with them. I can see major changes but the owner seldom can, "She was already doing that." I love it when every horse at the clinic is a major handful, the results are always jaw dropping. Clinic hosts would tell me they'll get me the particulars on each horse and I'd tell them, "Don't bother, don't need it, I work with whatever."

The "worse" the horse the more dramatic the progress.

Faith and I were making dramatic progress. She was rapidly getting under my skin. It took less than three minutes to change her ownership.

The therapeutic sessions had wound down, the boarders and others were horsing around and I decided I'd get Faith and do some ground driving practice with her. I had her tied to an arena pole because of the activities and I was tacking her up with the training surcingle and long lines. She was standing quietly and unconcerned until one of the long lines slid off her hindquarters and onto the back of her legs.

She unexpectedly went into a kicking, darting back and forth to the end of the lead line frenzy. I was standing beside her when she blew up and barely escaped getting run down and kicked. We had long lined before during giving to pressure and longeing work and she had exhibited no concern about the lines before but she was intensely concerned then.

"Whooowee!! I told you she kicked!" Shannon Milner called to me when Faith finally stopped and stood quivering. Then she turned to those by her who were watching and asked, "Did you hear the wind from those hooves?"

When people contact me after having a similar situation happen they want to know how they can get the horse to accept what they were doing.

Yes, I was working on ground driving but I discovered I need to do more herd dynamics (look to me) and more despooking (no matter what happens look to me). It wasn't the fact she didn't like the line sliding down the back of her leg. It was that she wasn't fully focused on me.

This "set back" was not a set back. It was an indicator that I needed to go back to the basics and instill something that is a crucial part of ground driving and longeing - look to me.